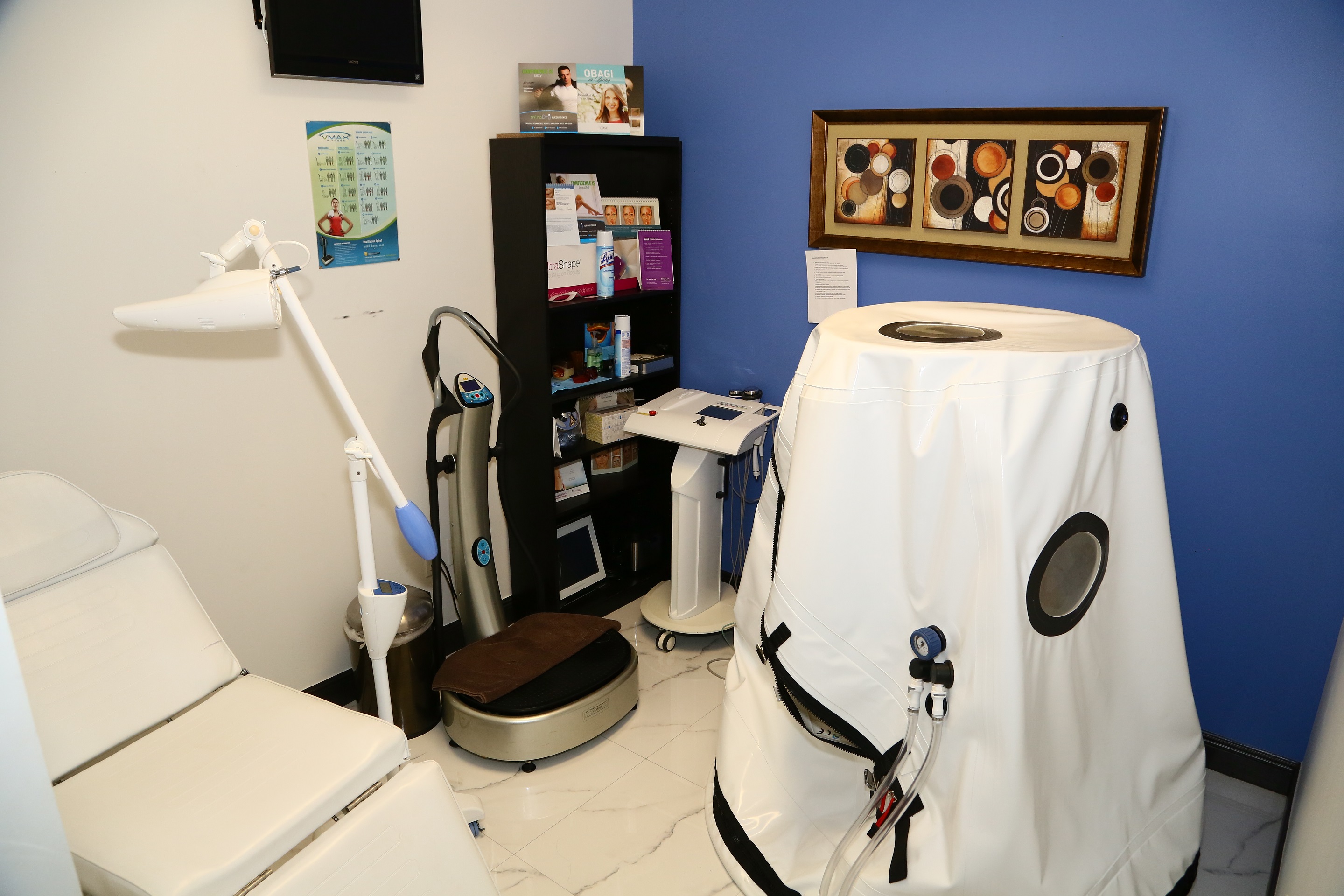 It's now time to rejuvenate yourself from the inside. The latest technology in oxygen therapies is now available in Doral. Boost your body oxygen levels for a healthier living and at the same time look at your best.

Hyperbaric oxygen therapy (HBOT) is the medical use of oxygen in a pressurized environment, at a level higher than 1 atmosphere absolute. Increased pressure allows for oxygen to dissolve and saturate the blood plasma, which yields a broad variety of positive physiological, biochemical and cellular effects.

Hyperbaric oxygen therapy has been demonstrated in several clinical studies to enhance the body’s innate ability to repair and regenerate. It is used as an adjunct therapy to complement and enhance the healing process in both chronic and acute conditions.

Your blood carries this oxygen throughout your body. This helps fight bacteria and stimulate the release of substances called growth factors and stem cells, which promote healing.

Your body's tissues need an adequate supply of oxygen to function. When tissue is injured, it requires even more oxygen to survive. Hyperbaric oxygen therapy increases the amount of oxygen your blood can carry. An increase in blood oxygen temporarily restores normal levels of blood gases and tissue function to promote healing and fight infection.

Pure oxygen can cause fire if a spark or flame ignites a source of fuel. Because of this, you can't take items such as lighters or battery-powered devices into the hyperbaric oxygen therapy chamber. In addition, to limit sources of excess fuel, you may need to remove hair and skin care products that are petroleum based and potentially a fire hazard.

Oxygen recently has been found to be an important component in skin rejuvenation, treatment of photoaging skin, and improvement in skin complexions. The interest in the use of HBOT for this purpose is continually growing and becoming more widespread. In addition to aging and genetic makeup, chronic UV radiation due to everyday exposure, especially UV-B, can greatly increase the rate of wrinkle formation through increasing skin angiogenesis and degradation of extracellular matrix molecules.

The use of HBOT and hyperoxia conditions has been found to attenuate the formation of wrinkles from UV irradiation. It accomplishes the task by possibly inhibiting various processes and pathways involved such as the HIF1-α, VEGF, neutrophil infiltrations, which are directly involved with promoting skin angiogenesis in its active state.

Joseph Priestley, one of the first discoverers of oxygen, once said, “Who can tell but that, in time, this pure air may become a fashionable article in luxury.” It seems that as the world is developing and Joseph Priestley’s prediction about air is becoming a reality.

Receiving regular treatments of HBOT is thought to increase skin elasticity and stimulate collagen production, leading to reduction of wrinkles and fine lines and improvement in skin texture. Oxygen is used in skin care because it is thought that delivery of natural oxygen increases cell metabolism. The use of oxygen therapy as a process of skin rejuvenation and reduction of loss of elasticity leading to formation of lines and wrinkles are becoming increasingly widespread in skin care clinics because of increasing successful results of their usage due to developing technologies.

To benefit from hyperbaric oxygen therapy, you'll likely need more than one session.